"It looks like Cloud has survived his fall and found himself a new friend named Aerith. Things seems to be going well so far until Aeriths “friend” shows up. Who is this friend? Find out on FF7MA!"

The voice only Cloud can hear tells him he's fine and urges him to wake up; when he does, he finds himself inside a church, with a cheerful flower girl watching over him. He feels the pain of his fall through the roof, despite the girl thinking that her flowers were enough to cushion him.

Aerith, the flower girl, recognizes Cloud as a guy who yelled at her a few days earlier on the street, right after he was ditched by AVALANCHE. Cloud apologizes and she instantly forgives him. He tells her about his wonderful "friends", and she thinks about how worried they must be. A cutaway shows the AVALANCHE gang calmly discussing the bets they've placed on Cloud's living or dying.

Aerith wants Cloud to meet her mother and her friend, but he starts thinking of her as a creep and tries to get away. They are interrupted by Aerith's "friend" Reno, who seems to be in charge of watching the girl, and is annoyed that she's left her house when she's not supposed to.

Cloud feels Reno is harassing Aerith and confronts him. They engage in tense banter while Aerith remains clueless. Reno's troops show up, and turn out to carry orders to babysit him, after "the falafel stand incident". While they argue, Cloud urges Aerith to get out and "meet her mom".

Aerith takes Cloud through the church rafters; he walks anxiously due to his fear of heights. They still manage to get away from Reno, who remains distracted by his past actions.

Aerith brings Cloud home to meet her spiritual, laid-back mother. Through their oblivious conversation, Cloud learns that Reno works for the Turks, who he knows in turn work for Shinra. He also learns that Aerith is "so special", that the Turks are intent on keeping eyes on her at all times.

Cloud runs away to escape the Turks and is intercepted by Aerith, who somehow arrives faster to the neighborhood exit. She learns that Cloud has no home and vows to find him one. She settles for a slide on a playground; Cloud is unimpressed. They chat about Cloud's life, during which he tells her about his time in SOLDIER. When Aerith asks which class he was in, the voice inside Cloud's head has to whisper him the answer: "First Class". She says she used to date someone in SOLDIER.

The conversation is interrupted when Tifa passes by riding on the back of a carriage. Aerith is alarmed to know that Cloud has a girl for a friend, and wants to go meet her. Cloud reluctantly tags along. 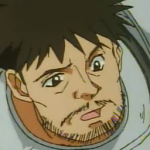