This article is about the future daughter of Raditz and Lunch of the alternate timeline; for the main timeline Ranch, visit her page.

What If Future Ranch Went To The Past?


Future Lunch (her mother)
Future Bulma
Future Gohan
Future Trunks's spirit, strong will and bravery
Fighting alongside her father
Playfully teasing Future Trunks for being shorter than her
Teamwork

She is one year older than her boyfriend Future Trunks.

Ranch has a split personality similar to her mother's disorder, an alternate evil persona known as Seiyo (西洋, Seiyō). Seiyo represents her more battle-hungry, brutal, calculating and vicious Saiyan side while Ranch's normal self is her Earthling side, representing her kindness, compassion and humanity.

She is Future Gohan's younger cousin and Future Trunks' girlfriend (despite Present Raditz and Present Vegeta's extreme hatred towards one another and Present Vegeta forbidding Present Trunks from seeing Present Ranch, a la Romeo & Juliet), and together, the two star-crossed lovers used Future Bulma's time machine to travel back in time and assist Goku with his heart virus, and the Dragon Team in their battles against the Artificial Humans and eventually Cell.

Future Ranch got to fulfil her life-long dream of seeing her parents for the first time alive and well (albeit their present timeline counterparts), which their conversation and Future Ranch's physical appearance/presence inadvertently fully secured Raditz and Lunch's status as a couple and the pair would marry (unlike the future timeline where they didn't marry and only remained in the couple status).

As Trunks next went back in time by himself leaving Ranch to protect the future and immediately came back in 5 seconds (from Ranch's perspective), they went into the Room of Spirit of Time to train and become strong to enough to defeat the Cyborgs.

Future Ranch is a very tall woman who most notably wears a red bandana/headband/ribbon on top of her head, her appearance consists of Raditz's long, spiky black hair with Lunch's front bangs, which she sometimes ties in a ponytail (though she lets it grow out during her training in the Room of Spirit and Time, keeping it that way until after the Cell Games).

Her facial features and eye shape bear a resemblance to Blonde Lunch's, while her black eyes and tan skin complexion come from Raditz. Additionally, Ranch has a noticeable battle scar on her left cheek and a Saiyan tail.

During her training in the Room of Spirit and Time alongside Trunks as well as during their last fight against the Future Cyborgs, Another of her outfits consists of her wearing Lunch's green tank top and yellow shorts, Raditz's red armband and Future Gohan's blue wristband. Against Future Cell she wears a turtleneck and the same type of jacket as Trunks.

When Future Ranch was younger, she wore a green t-shirt, black pants, a brown belt and blue boots.

Years after the destruction of both the Future Cyborgs and Future Cell, Future Ranch wears a light-green jacket with a light-blue undershirt and black pants.

Future Ranch is far more tomboyish, blunt, bold, serious, hyperactive, and aggressive than her main timeline counterpart, but she still retains some of her level-headedness, sass, energy, kindness, politeness, calm, collected, determination, passion and compassionate nature. She also has a somewhat similar speech pattern and angry tsundere tendencies to her blonde mother's. Her personality is overall different from her main timeline self, as both she and Future Trunks were raised by the humble Future Gohan and Future Bulma, leading to Future Ranch becoming a more mature and hardened person due to her tragic and troubled upbringing in the chaos that is the Future Earth.

As their father figure, Future Gohan is far more pure-hearted and selfless than Present Raditz and Present Vegeta, who are incredibly arrogant fathers. Their mother figure, Future Bulma, is kinder, wiser, more mature and serious than Present Bulma, who was naive, easygoing, spoilt and far more egotistical. Compared to the more shy, polite, and careful Future Trunks (Logos; the Focused, Logical One, and the Voice of Reason), Future Ranch is the brash, somewhat meatheaded, hyperactive, and stubborn one (Pathos; the Passionate One who Impulsively acts on her feelings), while the reverse is true for their main timeline counterparts.

Having witnessed both her parents' and cousin/father figure Future Gohan's murders at the hands of the Future Cyborgs, Ranch has severe PTSD and is forced to rely heavily on her survival skills, which isn't surprising given that she grew up in a dangerous post-apocalyptic environment. As such, she developed into a very intelligent, calm, level-headed, pragmatic, cautious and rational woman. She's also quite analytical and calculating.

Ranch openly expressed her romantic interest in Trunks by kissing him while they were in the Time Machine. Their relationship develops over the course of the Androids/Cell Saga, with Ranch even going as far as to attack Super Perfect Cell head-on after he kills Trunks with a Full Power Death Beam through the chest.

Ranch's ultimate dream is to finally settle down and start a family with Trunks after living for so many years in a chaotic world with their daughter.

One of Ranch's preferred fighting styles is firing Ki attacks is by using her fingers to mimic the shape of guns (finger-guns) and then shooting bullet-shaped energy blasts like a gun, similar to how Bad Lunch fires machine guns and many other types of firearms, Ranch, after seeing her mother, picked up on this and uses these Ki techniques for long-range projectile attacks.

Double Sunday: A double-handed attack that fires two energy waves from both hands.

Saturday Crash: A more powerful variant of the Saturday Crush.

Dynamite Monday: A vicious combo of punches and kicks culminating in a roundhouse kick to the head.

Shining Friday: A close-range variant of the Saturday Crash. One of Future Ranch's most powerful techniques, this attack was used by her to destroy Future Cyborg 18 during their final confrontation in Age 785.

Vacation Delete: A variant of the Saturday Crash that has the ability to paralyze opponents.

Masenko: An energy-wave attack taught to Ranch by Future Gohan.

Hyper Masenko: A more powerful variant of the Masenko, taught to Ranch by Future Gohan. This attack was used by her alongside Raditz's Double Sunday and Vegeta's Galick Blazer against Super Perfect Cell.

Future Ranch in her alternate outfit inspired by her mother Future Lunch (clothes), her father Future Raditz (armband), and her cousin Future Gohan (wristband (by Caish)) 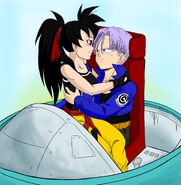 Future Ranch and Future Trunks, with their blades and jackets, first arrive in the present timeline (by GtmArtex) 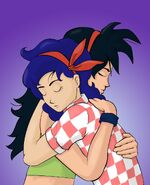 Future Ranch's ultimate hope/dream/goal: her and Future Trunks with their new child, a daughter (first version (by mitchell1406)

Future Ranch and Future Trunks vs. Goku Black (by IsabellaFaleno)