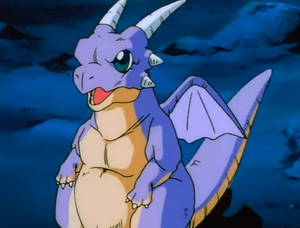 Icarus (ハイヤードラゴン, Haiyā Doragon) is a western-style dragon and is one of Gohan's non-humanoid friends.

It first appears in a flashback in "The Punchline" where Goku (falsely) blamed Vegeta for harming it, causing Gohan (who was an Ōzaru at that time) to focus his anger on Vegeta hola

It makes another appearance as a cameo at the end of the movie "Christmas Tree of Might", where it appears as Gohan's second present on Christmas Eve, although he wasn't allowed to keep it due to being non-canon.

Icarus officially makes its debut appearance in the movie "Lord Slug Abridged" where it befriends Gohan and is seen dancing with him in front of Piccolo, who was busy having a conversation with Nail. However, its appearance was short-lived as it gets turned into dragon soup by Chi-Chi with its skeleton remains being seen on the front yard of Goku's house due to the harsh conditions that befell on Earth that caused many animals to die.

Icarus also appears in the movie "Revenge of Cooler Abridged" where it was first seen camping with Krillin, Gohan, Oolong, and Goku before the group gets assaulted by Cooler and his henchmen. Unlike the previous movie, Icarus serves a bigger role in the plot as it manages to find Goku and Gohan caved in behind a pile of rocks and later assisted Gohan in going over to Korin's Tower to retrieve some Senzu Beans to heal Goku. It gets shot down by Sauza at one point but manages to survive and is lastly seen at the end of the movie, where it once again gets eaten—this time by Goku—and its skeleton is seen at the credits.