Member of the Ginyu Force

Jeice (ジース, Jīsu) is a member of the mercenary Ginyu Force squadron and the partner of Burter. He is from Space Australia (more specifically, Space Brisbane. GO SPACE BRONCOS) and is described of being a short, white-haired, red-skinned humanoid alien.

Jeice is by far the most level-headed member of the Ginyu Force, often ending up as the voice of reason between Guldo's bitterness, Recoome's larger-than-life showmanship, Burter's insecurities and Ginyu's strict military conduct. He legitimately considered the rest of his team as close friends (with the exception of Guldo) and was deeply devastated by their defeats.

He considers Burter to be his best friend, and was able to talk his teammate down from his fit over being challenged as the fastest being in the universe. Out of all his teammate's deaths, Burter's devastated Jeice the most, causing him to retreat from the battle.

Jeice is also highly and openly patriotic, frequently referencing his homeworld of Space Australia to the annoyance of others.

Jeice arrives on Planet Namek along with the rest of his comrades to deliver the new updated scouter to Freeza. After doing a quick warm-up routine, the Ginyu Force heads out to track down Vegeta, Krillin and Gohan and retrieve the Dragon Balls that Vegeta had previously stolen.

After confronting Vegeta and co. and stealing all seven Dragon Balls, Jeice, Burter, Recoome, and Guldo play Wheel of Death to decide on who gets to kill who. Unfortunately for Jeice, he gets a bankrupt, meaning that he does not get to fight anyone. Jeice was the first person to witness Guldo's death, resulting in Burter and Recoome forcing him to tell the news to Captain Ginyu. Jeice and Burter later spectate Recoome's fight against Vegeta and later against Krillin and Gohan. Just as Reccome was about to finish Gohan off, Goku arrives on Namek and revives Gohan, Krillin, and Vegeta with a Senzu Bean before taking out Recoome with one blow to the stomach.

Infuriated at Goku's intervention, Jeice and Burter use the Seizure Procedure technique, which has no effect on Goku (though it does manage to work on Krillin). Realizing that Goku is still standing, Jeice and Burter proceed to go to plan B and assault Goku head on. As Jeice starts threatening Goku, the Saiyan starts repeatedly punching him in the face, much to the Space Australian's chagrin. Burter and Jeice proceed to attack Goku, but the he manages to effortlessly hold his own against the two and knocks them away. As Jeice starts to get frustrated, Burter manages to calm him down and on working up a new plan which is mostly regarding his title as "the fastest in the universe". Eventually Jeice gets annoyed over this and states to Burter that Ginyu and Freeza are faster than him due to them having higher power levels and that technically Guldo's also faster than him due to being able to stop time. This causes Burter to become infuriated as he claims to not be slower than Guldo, but then starts breaking down because he believes that he has no special ability and is just the "big blue snake guy". Jeice denies this as he states that he's his best friend, which is something special according to him. In the middle of their bromance, Goku takes down Burter, knocking him unconscious, while asking Jeice if there's a Denny's on Namek. Horrified at the apparent loss of his best mate, Jeice flies off to inform Captain Ginyu so that he could come and beat Goku up.

Jeice is later seen reporting to Captain Ginyu about the deaths of Recoome, Burter, Guldo and accompanies him in confronting Goku and the others. Jeice remains on the sidelines as a spectator as Ginyu fight Goku in a one-on-one battle. Jeice later suggests Captain Ginyu to use the body changing technique, which he uses after seeing Goku's true power to far exceed his own.

Jeice tags along with Captain Ginyu (who in Goku's body) back to Freeza's ship and found out that someone has dug up the DragonBalls. Unaware of the switch, Krillin happily tells Ginyu that he and Gohan are the ones who dug up the Dragon Balls and notices Jeice, asking why is the Space New Zealand guy there with him (much to Jeice's annoyance). Ginyu then slaps Krillin in the face before revealing that he has switched bodies with their former comrade, Goku, and overwhelms both Krillin and Gohan in battle before Goku (in Ginyu's badly damaged body) arrives at the scene. Jeice is later confronted by a newly recovered Vegeta, who challenges him with his newfound strength.

While trading blows with one another, Vegeta announces that he has killed six of Freeza's flunkies and asks Jeice if he would like to be number seven. Jeice then tells Vegeta to piss off and punches him in the face, which has no effect on the Saiyan prince. Jeice wonders how Vegeta has managed to increase his strength in a short amount of time. Vegeta then hands him the Saiyan Official Handbook and Jeice realises that he is "f**ked right in the down-under" after going through a quick read through. Vegeta then mercilessly executes him by blasting him point-blank in the face.

Jeice along with the rest of the deceased Ginyu Force (minus Captain Ginyu) later arrive at King Kai's planet to take it over for Freeza. Just like his comrades, he gets sent to straight into Hell by King Kai. 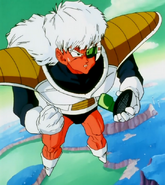