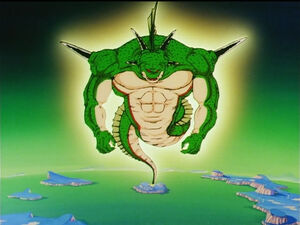 Polunga (also known as Porunga) is the Namekian dragon. At first, he spoke Namekian but was eventually taught how to speak English during the Namekians' stay on Earth in episode 30 (Part 3).

He is described by Krillin as "being on steroids" when compared to Shenron.

He dies at the same time as Super Kami Guru, and returns when he is restored.

Unlike Shenron, Porunga is capable of granting three wishes rather than one, but can only bring one person back per wish and only in the place they died or where their corporeal body is, meaning a wish must be made to place the person's body to a dsired location. A form of this is done in the Namek saga when Krillin and Gohan, for reasons unknown to anyone, wish Piccolo back to life and then to Namek.

The first time Porunga is summoned, Krillin, Gohan and Dende wish for Piccolo to be resurrected and then randomly brought to Namek. Unfortunately for them, Vegeta arrives on the scene, unamused at the Earthlings and Dende trying to take his wish for them. He forces Dende to use the third wish to grant the Saiyan prince immortality (denying Krillin the hoagie he wanted) but Super Kami Guru picks that very moment to die, thus disabling the Dragon Balls.

When Guru is revived by Shenron, thus reactivating the Namek balls, Dende uses the last wish from Porunga to transport all beings currently on Namek (except Goku and Freeza) to Earth. Dende did so to troll Freeza, but coincidentally this factored into Kami and King Kai's plan nonetheless.

After Super Kami Guru's second death, Moori becomes the new Dragon Balls' master, allowing them and Porunga to remain usable. Dende summons in West City in order to bring back the dead Dragon Team members that died at the hands of the Saiyans (as well as Krillin and potentially Goku.) Only Bulma realizes how potentially problematic it would be to summon a large dragon creature in the middle of a population center like West City. His appearance immediately panics the locals, before the police calm them down.

This time, Dende decides to expedite things by requesting six wishes from Porunga instead of the standard three, stating that otherwise in four earth months (one Namekian year) they would just summon him again to bring back any remaining Z Fighters. Though unconventional a move, Porunga allows these considering that bringing back people kilkled by Freeza, Vegeta and Nappa would be child's play, though Dende also requests a new Namek be made for the Namekian populace to live on, a considerable "dick move" as Porunga puts it, though he still allows the wishses nonetheless. When Gohan asks for Goku to be revived, Porunga informs them that Goku still yet lives, and then denies Gohan's wish to simply transport Goku to earth as making a new planet from nothing drained him considerably.

In the end, Dende uses the final wish to transport all Namekians (including himself and excluding Piccolo/Nail) to New Namek after he botches his love confession to Gohan.

Porunga is only briefly mentioned in the Cell saga. After seeing the Earth dragon Shenron for the first time, Dende unfavourably compares him to Porunga, stating that the latter dragon could literally wear the former, tube-shaped dragon "like a scarf."