This article is about the daughter of Raditz and Lunch of the present timeline. For the Ranch who came from the future, see Future Ranch.

What If Raditz Turned Good? - Part 4

Her parents
Her uncle & aunt
Her cousins
Pan
Trunks (boyfriend)
Trunks saving her from Super Boo
Trunks's spirit, strong will, bravery and progress into a more humble, respectful and kind-hearted person in Dragon Ball Super
Teasing Trunks for being shorter than her
Bulma
Piccolo
Training and getting stronger
Looking good while competing
Fighting in battles
Making bad puns
Brushing/combing her hair
Listening to music on her walkman and headphones
Vehicles (especially cars and the red F-250)
Playing with her toy gun
Teasing People
Technology like flying her Capsule Plane
Watching TV
Trash-talking
Back-chatting
Cabba
Caulifla (eventually)

Maths
School
Homework
Being ignored
Boys wanting to compare the size of their Power Levels
Being looked down upon because she's a girl
Vegeta's toxic attitude towards Trunks
People stealing her papa's attacks
Trunks' stubbornness
Trunks' cocky, snobby, bratty, spoiled and rude behavior, temperament and pride back in the Boo Arc
Raditz's Singing
Super Boo (especially after he murdered her mom)
Frost
Kale (for eliminating her from the Tournament of Power and getting her chastised by Beerus)
Baby (especially after he turned her into his host body)

Son Ranch (孫 ランチ, Son Ranchi) (also known as Raunch and sometimes Kid Ranch to distinguish herself from her future counterpart) is the daughter of Raditz and Lunch in the main timeline and the older sister of her precocious and fun-loving twin brothers Daikon (black-haired green-eyed older twin) and Mooli (blue-haired blue-eyed younger twin) and a prominent character in Dragon Ball R&R. Ranch is voiced by Courtney Meeker.

Ranch is one year older than Trunks and two years older than her cousin Goten.

Ranch most notably wears a red bow/headband/ribbon (alternatively she wears the Power Bow, an accessory/weapon given to her as a late birthday present from Bulma) on top of her head. Her appearance consists of Raditz's long spiky black hair with Lunch's front bangs and wavy swirls.

Her facial features and eye-shape bear a resemblance to Bad/Blonde Lunch, while her black eyes and tanned skin complexion come from Raditz. Additionally, Ranch has a Saiyan tail.

She wears a yellow jacket and green tunic with a red belt, green socks and black shoes as her casual outfit. While her fighting and training outfit involves her wearing a purple/dark blue shirt (medium blue in Dragon Ball Super), red wristbands/belt and orange/yellow pants ensemble.

As a late teenager, Ranch's hair has shortened and resembles her grandmother Gine's haircut, albeit with her signature red bow. Sometimes, she wears her hair tied back into a ponytail like her father. She wears earrings, a light-gray collared shirt, a purple skirt, long blue/black striped socks and brown boots.

As an adult, Ranch has inherited Raditz's 6'1" height and muscularity, and has re-grown her hair to reach the same length as her father's, albeit with her mother's signature swirls being more pronounced and the Power Bow being tied at the bottom tip. She wears a Metamoran fusion-inspired vest and black-brown boots inspired by the style of Raditz's original armor.

Ranch is tomboyish, energetic, sassy, bold, determined, and passionate, but also a "know it all", as she's very intelligent, level-headed, pragmatic, rational, and has a head full of dreams. She's quite analytical, insightful, and calculating like her father Raditz, but due to her young age, if she gets pushed enough (which it is somewhat easy to irritate her) she will become temperamental similar to Bad Lunch.

Like her mom, Ranch likes to trash-talk, tease and back-chat; however, if you're friends with her, then she is absolutely sweet like Good Lunch. Ranch has a lot of interest in battles and competitions like her father, she regularly fights for the thrill of it and trains with her dad Raditz and Uncle Goku (who she keeps an eye on) as well as Gohan (who she looks up to as as a role model to strive for), Trunks (who she can be a little cynical towards since she's well aware after their training together of how much Trunks is spoiled, snobby, egotistical, bratty, and rude, all being due to his father's influence) and Goten.

Because of her young age and little size, she is often looked down upon by adults and treated like a kid. As such, she has a strong desire to rub their faces in it and prove all the adults wrong, such as when she asked Vegeta to teach her Super Saiyan 4 due to Goku and Raditz refusing to teach her Super Saiyan Blue. She often gets pestered by Trunks because she's a girl.

Due to her feminine side, she also wants to look good whilst fighting (she gets that from her mother), meaning she's both tomboyish and girly, and like her mother, she enjoys making bad puns, She can be somewhat ruthless during sparring sessions. Her Metamoran Fusion with Goten is known as Ranten (male-dominant) while with Trunks, it's Raunks (female-dominant).

During a sparring session with Raditz, she was able to transform into a Super Saiyan for the first time before Trunks and Goten with a little help of her accidentally sneezing. Initially as a Super Saiyan, Ranch was just as moody as Bad Lunch, but she has since learned to control it and keep her normal personality, at least in her original Super Saiyan form ever since.

Of the trio, Ranch is Logos (the focused, logical one, and voice of reason), Kid Trunks is Pathos (the passionate one that impulsively acts on his feelings) and Goten is Ethos (the sensitive, empathetic, innocent one that is attune to his own feelings).

At times, she's too much of a know-it-all for her own good because she was raised by her wise-cracking, smart-alec parents. She appears to be unable to see the problems with her actions. Ranch can get messy and has flaws of being too prideful and arrogant, and being a child means that she'll make rash decisions and throw temper tantrums, which she gets from her father and blonde mother.

In the 25th Tenkaichi Budokai semi-finals, while she did win against Trunks, Goten's fighting skills from his training with Gohan (that she didn't completely know about/forgotten after Chi-Chi stopped Ranch and Goten from training together; making her decide to instead train with Trunks) surprised and defeated her in the finals, making Goten the Champion of the Junior Division.

These shortcomings also cost her in the Tournament of Power (where she was full of energy/excitement with a huge desire to prove herself in battle). While she managed to fight with Gohan's group, save Krillin from being eliminated by Frost before blowing the latter out of the ring, and perform an effective team attack with Raditz, her fight with Caulifla and Kale of Universe 6 proved to be her undoing.

Despite her effective use of the Power Bow during her fight with Caulifla, as their Saiyan pride and rivalry grew, she goaded Ranch into going SSJ3 for the first time, despite knowing its uselessness. The form left herself drained and wide open to an attack from Kale, who had just achieved the Berserker Super Saiyan transformation.

Kale sent her flying out of the ring with a single punch, giving Ranch the dishonor of being the first Universe 7 member to be eliminated from the tournament. Beerus promptly yelled at Ranch for making such a colossal error and said that he would put the blame squarely on her if Team Universe 7 were to be defeated, reducing the young half-Saiyan to tears. As a result, Ranch vows never to use the SSJ3 transformation again.

Ranch's hobbies include: listening to music on her walkman and headphones, interest in vehicles like a Red F-250 (inherited from Lunch's passion for locomotives) and also purple/red/yellow/blue cars, combing/brushing her hair, playing with her toy gun, watching television, and technology like flying her capsule plane (that was a gift from Bulma). She'd rather train and get stronger than go to school (especially because she has trouble with mathematics).

As a fully grown-up adult, she has mellowed out and has more control over her smart-alec tendencies and temperamental side, becoming more optimistic, but inherits her father's tendency to show off and act over the top like an eccentric goofball and from her mother's side she's confident and assure of herself to show her strength and good looks. She'll act dumb to people she doesn't like as much, such as playing dumb towards Champa, which rubs him the wrong way.

However, when agitated, she can be just as wild as her mother Bad Lunch, though Ranch is generally more respectful and thanks to discipline from Vegeta and Bad Lunch, she can get serious and get what she wants as well as knowing how to push her boyfriend Trunks' buttons to "really get him going" so he could "get some later". When she flirts, she's in full control of Trunks.

One of Ranch's preferred fighting style is firing ki attacks is by using her fingers to mimic the shape of guns (Finger-Guns) and then shooting bullet-shaped energy blasts like a gun, similar to how Bad Lunch fires machine guns and many other types of firearms. Ranch, after seeing her mother, picked up on this and uses these ki techniques for long-range projectile attacks.

Her second preferred style is using deception, which she picked up from training with Raditz.

Because of Raditz's tail/Oozaru training, Ranch has gained control of her Oozaru form.

Double Sunday: A double-handed attack that fires two energy waves from both hands.

Dynamite Monday: A vicious combo of punches and kicks culminating in a roundhouse kick to the head.

Shining Friday: A close-range variant of the Saturday Crash.

Take-out Tuesday: (is a work in progress forgive who forgot to add)

Vacation Delete: A variant of the Saturday Crash that has the ability to paralyze opponents.

Fortnight: A combo attack with Raditz used in the Tournament of Power.

x10 Fortnight: A variation of the Fortnight used by Raditz and Ranch in their Super Saiyan 4 forms to kill Perfect Baby as he tried to escape Planet Plant.

Ranch with her mother Lunch and father Raditz 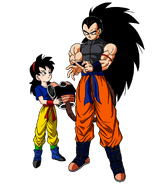 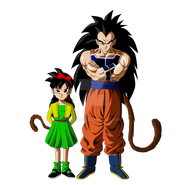 Ranch and Raditz in DB R&R

Ranch flying near her mother's truck (by Nexus Mania) 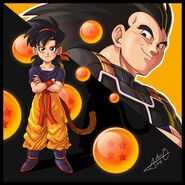 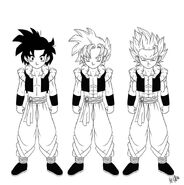 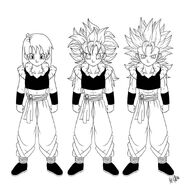 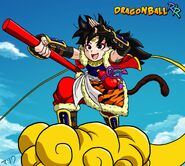 Ranch dressed as the Monkey Queen (by malikstudios)

Paata Tahts and Ranch (by TaleDuder)

Ranch in her winter coat jacket (by samrossco99) 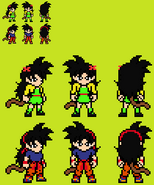 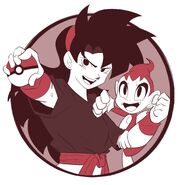 Ranch and her Starter Pokémon Chimchar (by DrNeonBones) 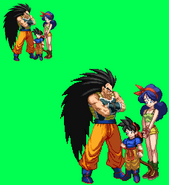 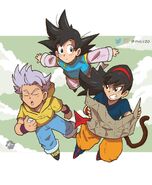