DragonBall Z Abridged
Space Australia is the home planet of Jeice, and is best described by a brief dialog between him and Krillin. It was first mentioned when Burter won an all-expenses-paid visit there due to a spin on the Wheel of Death, and from its brief descriptions, is presumably a near-exact replica of Australia, only on a planetary scale, in space, and with the word "space" beginning the names of almost everything from the planet.

Jeice lived in Space-Brisbane (in a flat on at least the sixth floor based on a conversation with Burter involving a piano) until he joined the Ginyu Force. Jeice's deceased sister was killed by a space dingo. 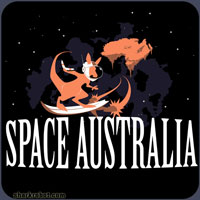