Demon Goddess of the Church of Fuck Box

Queen of the Demon Realm

Dumplin (finds him and his commentary refreshing, funny, and cute)

The Fuck Box, Pole Dancing like a stripper, and the kinky shit since she acquired a high libido

Paata and his butt

Drinks (including Tea (from Dumplin) and Milkshakes (from Puddin))

Cats and cosplaying as Catwoman

Working in her laboratory

The many different types of food in the world

Mira doing incest with her and/or Puddin and/or Flanny

People stopping her from reviving the Demon Realm

She later marries Demon God Dumplin becoming Demon Goddess Towa (悪魔 の女神 トワ, Akuma no Megami Towa) after Dumplin defeats Demigra. She later attempted to convert her family into her original agenda of reviving the dead Demon Realm with her alchemy/necromancy, that idea was still on her mind.

After being rejected she healed Mira and went back to fighting the Time Patrol and it's members like Paata, her husband, and later her daughter Puddin, while still loving Dumplin, Puddin, and Flanny.

It's known that the 2nd Towa that Dumplin seduced and married either was killed, stayed at home, or went back to her own timeline (confirmed to be the third option since Time Patrollers are forbidden of altering timelines). The original one (that we all know and love) was absorbed by her son Mira and then supposedly killed by her daughter Puddin.

While she didn't always show it due to her cold exterior, Towa has a very soft spot for her family.

Originally she's very calm and confident in her abilities, Towa thinks she is superior to every other being, and because of this, underestimates all of her opponents, calling them simple pests in her plan. She is cold and cruel, as shown by her attitude and lack of consideration of how her magic will distort and ruin time.

She enjoys brainwashing people, and using her vast knowledge and logic does not hesitate to use that power on anyone, she is perceptive enough to use those with evil hearts to accomplish her goals as they are easier to be controlled. She is extremely persistent in her goals, attempting to distort the timeline even after many failed attempts, simply because of her belief that she is worthy enough to completely destroy the fabric of space and time, and completely alter history to her whim. Even so, Towa seems to draw the line at actually destroying the universe, which she views as a senseless endeavor.

Towa is also shown to be willing to go as far as deceiving God of Destruction Beerus not even fearing of his or Whis' power by pretending to be Chronoa and her acting was so convincing that she managed to fool both Beerus and Whis, causing them to leave Age 779 during Freeza's revenge without them realizing her deception until they arrived in Age 852, preventing Whis from assisting Goku and his friends.

Towa seems to have changed in quite a subtle way, lessening much of her coldness and cruelness after Dumplin seduced her to be together with him, although she mostly acts the same, she holds a soft spot for the Demon God fulfilling his every need. She finds him refreshing compared to the people she has witnessed across many eras (like when she shrugged off and brushed aside Lirran's flirting when he was calling her beautiful) and sees Dumplin's witty commentary and humor as something funny and cute. Towa and the Demon God Majin are in sync personality wise, they are both smart alecks, sassy, snarky, sarcastic, and have a confident attitude though Towa expresses it in a more subdued/reserved type of way.

Towa left Dumplin and Puddin because of her agenda and even fought her daughter once pretending to confuse her for someone else (though Towa did this so she could get away from her attachment to Puddin since she loves her and Dumplin). Her personality slowly changed after leaving her family, slowly going back to her old ways. However she does still care about her husband and daughters, she is just a woman of conviction for her career wanting to protect her fellow Demon people by executing the revival of the Dark Demon Realm since her people were dying and in need of help, she was losing her rationale and focus to the point where she erased Dumplin from history, and by extension her daughter Puddin (However due to Xenoverse Theory and the Dumplins and Towas of different universes having many illegitimate children, Puddin was able to still exist).

When Mira betrayed her and his core blowing up would catastrophic, she was not above fighting against Mira, she considered Mira nothing but a failure for his actions against her. Towa realized what she had done and decided to protect Puddin from him and sacrifice herself for her family.

"I really should get out and exercise." - Towa when selected by Dumplin expressing her desire to exercise.

Towa: Alternate timeline self, the second Towa that was also seduced by Dumplin adding to his harem. Whereabouts currently unknown, she either was killed, stayed at home, or went back to her own timeline (confirmed to be the third option since Time Patrollers aren't allowed to alter timelines).

Dumplin: The Towas' Demon God of a husband. As he is Number 1 on her favorites list, she finds him refreshing compared to the people she has witnessed across many eras and sees his witty commentary and humor as something funny and cute. A "supposedly" forbiddin love of a Time Patroller and a Time Breaker, Lanipator confirms that "The sex was f**kin fantastic!!!" confirming their shared high libidos. Dumplin is the Tiny Guy to the Tall Towa, who is so much taller than Dumplin he doesn't even come up to her waist.

Puddin: The Towas' and Dumplin's daughter who serves as a rookie Time Patroller in the Time Patrol. After the events of Xenoverse 1, one of the Towas decided to continue trying to achieve her goals, Dumplin and Puddin decided that they did not agree with her actions and sided with the Time Patrol. Because of this, Puddin is often forced to put a stop to her mother's evildoings. Despite this Puddin seems to be on good terms with her mother, as Towa would often wave at her in the middle of battle or when she invited her to a family Thanksgiving. In fanart, it was revealed that before Puddin chose her form, she was a formless blob with a kitty face. During this time, Towa would often carry Puddin on her head. Once Puddin saw her mother, she said to herself "I want to look just like mommy!" She later then grew into a beautiful woman of her choosing "Tall and Elegant like her mommy. Terrifying and Powerful like her daddy." Although their familial relationship is largely positive, Puddin does have some resentment toward her mother's inexcusable absences in Puddin's life, such as not attending piano recitals or soccer games. This is especially frustrating to Puddin as Towa is literally a time traveller and has no real reason to not be present when Puddin needs her. This resentment is shown when they fight each other after Puddin follows Towa back in time to prevent her from killing Shenron before Shenron could summon Dumplin. Towa attempted to protect Puddin by sending her to the Fuck Box for eternity so she could handle Mira herself, and was later vaporized by Puddin after being absorbed by Mira. Puddin did not wish to kill her own mother, but Mira and Goku's interference forced her hand. She takes very much after both her father and her mother in looks, species, and fashion sense. Her most notable features are her cat like mouth, heart shaped steam holes around her belly button, and her cheerful habit of proclaiming the term "Nya!" Normally, she is seen with Light-Blue eyes but then has Towa's Purple eyes when Puddin's dark side starts becoming dominant.

Mira: Towas' son/creation. She finds his incestuous thoughts about her disgusting and has stated that she does not like Mira romantically.

Flanny: Towa and Dumplin's second daughter. Towa held a close bond with her daughter during her time living in the Demon Realm with her. Flanny would later mourn her mother's death at the hands of Puddin.

At first, Towa's power is difficult to measure, but what is known is that she can hold her own against Super Saiyan Trunks. She uses her magic and abilities to assist as a medic and healer) Dumplin and toy with her opponents. As a scientist, she is a more strategic fighter, coming up with clever plans to deal with threats and enemies (that said Towa's raw physical strength was able to cause major damage to the Oozarus they were facing which greatly impressed Dumplin). These abilities would also be inherited by her daughter Puddin.

In Xenoverse, she is capable of delivering rapid attacks from her staff and kicks, while moving around the battlefield with speed and grace. Like her brother, she is proficient at using a spear in combat, and is quite skilled at wielding her spear-staff. She is shown to be a powerful dark magic user, strong enough to control Cell during the Cell Games and Future Perfect Cell in the altered history of Age 785 of Trunks' timeline.

Xenoverse 2, Puddin is able to hold her own against Towa though Towa was holding back (likely due to Towa still loving Puddin so instead she tries to get away from her attachment).

Towa is proficient in both Ki and Magic and is able to transform into Darkness Towa which increases her powers and to an even further extent with Demon Goddess Towa gaining Godly Ki and Magic.

Similar to Bulma and Dr. Gero, Towa is a BRILLIANT scientist. Like Dr. Gero, she is skilled in bio-mechanical engineering, genetic engineering, biology, and hacking into computers. Her skills in magic have been so advanced to copy the abilities of gods like the Demon God Dumplin's Fuck Box.

Towa along with hand-to-hand combat, utilities Mana and Ki for her attacks.

Towa's main weapon is her staff which she can use for many offensive and defensive magical abilities, such as healing, and using her alchemy/necromancy to revive. 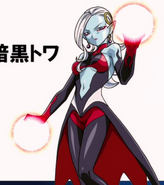 Darkness Towa in Heroes and Xenoverse 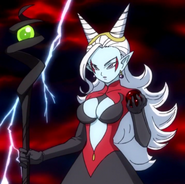 Dumplin and his wives the Towas

Dumplin Pool Party with the Towas, Nappa, and Colonel Violet

Dumplin and Towa on a motorcycle

Dumplin and the Towas conception of Puddin 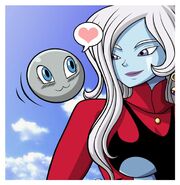 Puddin wanting to be tall and elegant like her mommy

Towa witnesses the Dumplin and Puddin doing The Dumplin Strut 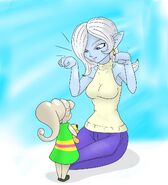 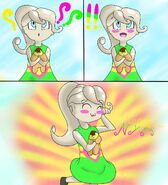 Child Puddin interacting with her mother 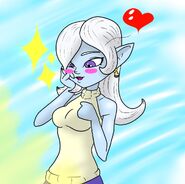 Towa and some of her family members 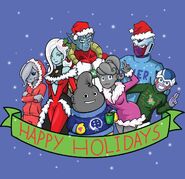 Towa and her family during Christmas

Towa giving Puddin a replica of her outfit

Dumplin and the Towa harem, his many wives

Dumplin and the other TFS GAMING characters